Warning: "continue" targeting switch is equivalent to "break". Did you mean to use "continue 2"? in /homepages/20/d390604847/htdocs/clickandbuilds/HaudenosauneeDC/wp-includes/pomo/plural-forms.php on line 210
 Clan System – Haudenosaunee DC
Skip to content

Among the Haudenosaunee are groups of people who come together as families which are called clans. As a matrilineal society, each clan is linked by a common female ancestor with women possessing a leadership role within the clan such as a mother, grandmother and so on.

The number of clans varies among the different nations among the Haudenosaunee, such as with the Mohawk who only have three whereas the Oneida have eight clans within their individual tribal system. 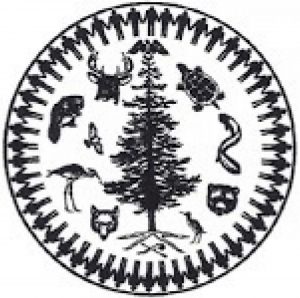 The clans are represented by totems such as birds and animals and are then divided into the three elements: water, land and air. The bear, wolf and deer represent the land element, the turtle, eel and beaver represent the water element and the snipe, hawk and heron represent the air element. You can see these clan totems honored within our insignia.

Family names and clans are passed down from mother to child. For example if a man belonging to the turtle clan were to marry a woman of the wolf clan the children would be of the wolf clan.

In Haudenosaunee society each person has their own family, which includes their mother, father and brothers and sisters. But with this comes their extended family including everyone else belonging to the same clan. This system was especially helpful when traveling from nation to nation as people would search out members of their same clan who would then would provide food and shelter and care for them as part of their family. Because people of the same clan are considered family, marriages within the same clan are forbidden. The clan system still survives among those who follow the traditions.

Within the Haudenosaunee Constitution are terms for the adoption of individuals, groups or an entire nation as was done with the Tuscarora. The process called for the approval of the chiefs of the adoptive nation and confirmation of all the people of that nation.

Losing members to sickness or war, the Haudenosaunee often adopted members of enemy nations and later from European invaders. Adoption allowed the Haudenosaunee to keep numbers large and remain a powerful force.

Adoptees were often women and children though men were sometimes adopted. Men were tested for their bravery before adoption through tests of endurance. Many ran a gauntlet, up to hundreds of yards, where people stood on either side and beat him as he passed. If he fell he was beaten to death but if he made it he was considered a good prospect for adoption.

Adoption however was still up to the women of the clan who could refuse to allow them into the nation. Those selected were given the names of dead relatives of their adoptive family, those rejected were killed. Keeping with the Haudenosaunee values any adopted member was still allowed the freedom to choose his or her own religion.

The world was young when clans were adopted into Haudenosaunee culture. While populations were small extended families were close and cousins were akin to brothers and sisters. As the population grew problems began to occur with families becoming distant as more and more villages were created. The social dynamic was changing and families were becoming more and more separated.

With the growing population came more deaths and as it was the custom for a family to grieve for a period of one year people were in constant mourning. The traditional ways were being lost as fewer people were performing the Four Sacred Rituals and elders, becoming concerned, decided to address the problem.
It was during one of the many meetings held to restore societal stability that a young man made a suggestion to follow the example of nature and divide themselves into groupings. He pointed out that there are many different species of birds, yet they are all still birds. Likewise, we can divide ourselves into families yet still be Haudenosaunee. Because of his wisdom the Elders named this man Rónikonhrowá:nen meaning “He who has great ideas”.

During the next few days after each of the eldest women woke and gave thanks to the creator they went to fetch water from the river. Each saw an animal at the river. The first saw a deer and Rónikonhrowá:nen told her that from then on her and her ancestors belonged to the deer clan. The others in turn saw a bear, a snipe and an eel making each of them members of that clan. Because they were all on the one side of the river they were united into one group or moiety to which they all belong.

The next morning Rónikonhrowá:nen returned to the people left on the other side of the river and instructed them as he had the first group. Like the others, upon giving thanks to the Creator the eldest women saw the animals that would represent their clans. In turn each saw their animal with the wolf being first followed by a beaver, a turtle, and a hawk. These would now belong to the wolf, beaver, turtle and hawk clans creating the second moiety.

With both groups separated into clans within the two moieties the system followed that if someone was to die from one moiety all the clans of that group would be in mourning while the members of the other moiety would perform all necessary duties.

Within the clans of the Haudenosaunee all leadership members hold equal powers and are accountable to everyone. The Clan Mother, usually the eldest woman in a clan, holds a leadership role and has the power to choose and depose a Chief. Taking into account all she knows about the candidate in his dealings throughout his life she decides who is a good fit to represent the clan. The Chief  is responsible for the welfare of his nation and represents the opinions and issues of all those concerned.

Within the system there is also a female and male Faith Keeper, both of whom are responsible for acting as spiritual guides for the people. The Faith Keepers are in charge of conducting seasonal ceremonies and the Four Sacred Rituals.
Though the Chief, Clan Mother  and Faith Keepers all have leadership roles they must work together to maintain a balance of power and they are all accountable to their clan.